Mr. Eddie Terrill is an Oklahoman who has had significant influence on air quality policy and improvement in the state and nationally.  He was educated in Oklahoma and is a 1981 graduate of Northeastern Oklahoma State University with a Bachelor of Science degree in {what field?}.  In 1985, he earned a Juris Doctorate degree from the University of Tulsa and holds a license to practice law in the State of Oklahoma.

Mr. Terrill began his career with the Department of Environmental Quality (DEQ) in 1995 and was instrumental in establishing the Regional Office at Tulsa merging the Tulsa City-County Health Department’s Air Quality Program into the state system and serving as the manager. Eddie Terrill was hired as the Director for the Air Quality Division of DEQ in October of 1998.

Mr. Terrill received the AWMA S. Smith Griswold Outstanding Air Pollution Control Official Award because he has been a strong advocate for clean air policy throughout his career.  Since joining the DEQ in 1998, Eddie has significantly contributed to improvements in air quality within the state and beyond.  His professionalism, high principles, and integrity set a high standard for the DEQ’s Air Quality Division.

As DEQ Air Division Director, he ensured rules were enforced equitably and permits were issued in a timely manner.  He introduced energy efficiency principles into the air quality management process and worked with the EPA regional office and headquarters to improve efficiencies in implementation of the Clean Air Act. He is respected by state and federal officials, the regulated industry, other stakeholders, and the public for his knowledge, expertise, professionalism, and candor.  His reputation and interaction with EPA headquarters helped resolve difficult national policy issues, for example, the supplemental Regional Haze Plan for Oklahoma. Eddie worked to implement EPA initiatives in a way that was most effective for Oklahoma considering local concerns and needs.  Eddie looked for innovative ways to streamline the Air Program for Oklahoma and to decrease the burden on the regulated industry while continuing to improve the air quality of the State.  Permits by Rule, General Permits, e-Permitting and electronic reporting of annual emissions were all initiatives implemented under his leadership.  In addition, Eddie has collaborated with EPA Region 6 to reduce the backlog of SIPs and decrease processing time.

Mr. Terrill’s influence extends beyond Oklahoma’s borders through his work with his counterparts in the Central States Air Resource Agencies (CenSARA) and the National Association of Clean Air Agencies (NACAA).  Mr. Terrill gained a positive reputation.  He has been an effective leader in CenSARA, serving as Vice-Chair and Chair three times, and a member of the Policy Oversight Group for CENRAP, the regional haze arm of CenSARA.

As co-chair of the NACAA Compliance/Enforcement Committee, Eddie worked to build relationships with the Office of Enforcement and Compliance Assurance at EPA.  Along with his co-chair, he led the committee to participate in joint discussions of state and federal representatives at the Air Enforcement Manager meetings.  The goal of these meetings was to determine how EPA policy, and their interpretation of that policy, affects the state and local programs.  This forum benefited the state and local governmental organizations by providing insight to how EPA operated and provided accountability.  Under his leadership, the committee also worked on HPV policy, the state review framework, evaluation of enforcement programs and development of reporting tools for sending data to EPA.  His contributions to this committee promoted consistency between regions and led to improved compliance and enforcement nationwide.  In Oklahoma, consistency in enforcement also improved and became an example for other programs across the Nation.  Eddie has been on the NACAA Board of Directors for 18 years and also served as Vice-President and President of NACAA.

Mr. Terrill also had the opportunity to make an impact on a national level as a member of the Clean Air Act Advisory Committee.  Eddie was selected to represent the states for this committee because of his knowledge and experience in air quality.  His contributions helped to shape policy at EPA.

Ed Fike served as the Administrator for the Oklahoma Scenic Rivers Commission (OSRC) from September 1983 to June 30, 2016. After almost 33 years, members of the 2nd Session of the 55th Oklahoma State Legislature (May 2016) enacted a new law that consolidated the OSRC into the Grand River Dam Authority on July 1, 2016.  In his new role, Ed continues to pursue his passion for rivers and water as GRDA’s Vice-President for Rivers Operations and Water Quality.

He has served in the past as member of the National Association of State and Local River Managers Association and the River Federation.  He was also the only state representative appointed to the federal Interagency Wild and Scenic Rivers Coordinating Council, serving from 1995-2005 and was a board member of the Oklahoma Water Resources Board from 2005-2017. In addition to his daytime job, Ed serves as President of Keep Oklahoma Beautiful, President of the Midwest Chapter-River Management Society, as Vice-Chairman of the Cherokee Nation Environmental Protection Commission, as Vice-Chairman of the Solid Waste Research Institute of Northeast Oklahoma and as board member of the Illinois River Watershed Partnership and Save the Illinois River, Inc.

Ed regularly partners with federal/state/tribal/local agencies, communities, businesses and individuals to educate, promote the enjoyment, and mitigate impacts on these rivers and reservoirs. Ed was a key player and technical resource in successful defense of water quality and scenic rivers in the 1992 U.S. Supreme Court’s ruling in the Oklahoma vs. Arkansas/USEPA Case which effectively affirmed that downstream states’ water quality standards must be maintained and protected by upstream states.  This ruling provided the momentum needed to improve water quality in the Illinois River and subsequently allowed for the growth and economic development of northeast Oklahoma.

Everyone is Ed’s Couzin… and, he’s renowned for advocating to those who will lend an ear,” Please take pause daily to pick up two pieces of trash and properly dispose or recycle the materials… the synergy of our efforts will help preserve and protect our state’s aquatic and terrestrial environments.”

Fenton Rood is currently the Assistant Division Director for the Land Protection Division of the Oklahoma Department of Environmental Quality. But Fenton has a long history of environmental mentorship in Oklahoma.  As early as 1974, Fenton provided Oklahoma leadership in reuse and recycling of natural resources to all who would pay attention.  Recognized by his tiny Datsun pickup with a bed full of recycled paper, Fenton made the rounds within the small group of environmental professionals active in State government, reminding all of the importance of environmental stewardship.

Fenton has also been active on the EFO Activities Committee since its inception.  He has brought hundreds of suggestions to Committee members for speakers and topics throughout over 25 years of Conference planning.  He has also brought his talents in singing and guitar playing to our Conferences and programs.

For over twenty years Fenton has also been involved in the organic foods business. He and his wife have operated natural foods stores and restaurants. He earned a B.A. in Geography, and an M.P.H. in Environmental Health, both from the University of Oklahoma.

Fenton is the President of the Tree Bank Foundation and past president of Keep Oklahoma Beautiful.  He is also a member of the Medical Marijuana Food Safety Standards Board.

Derek was with the OWRB over 30 years and lead the OWRB’s Water Quality Programs Division since 1995. In that role, he has managed the promulgation of Oklahoma’s Water Quality Standards and Standards Implementation rules, lake monitoring work including diagnostic and feasibility studies as well as restorations, and much of Oklahoma’s surface and groundwater monitoring programs.

Derek received his B.S. from Oklahoma State University in Zoology in 1983 while playing football for Coach Jimmy Johnson and working at the Cooperative Fish and Wildlife Research Unit. He received his M.S. from the University of Oklahoma in 1987 in Environmental Science. He began work for the Oklahoma State Department of Health in 1984, transferred to the OWRB in 1987 as WQS Coordinator and has been Water Quality Programs Division Chief since 1995.

He has served the Oklahoma Water Resources Board, and the people of the State of Oklahoma with Distinction and Honor.  He was a great friend to EFO.

Now, on this occasion the Environmental Federation of Oklahoma does hereby express appreciation for James R. Barnett’s many years of service to the citizens of Oklahoma. Through his outstanding leadership and service in preserving and protecting Oklahoma’s natural resources, James R. Barnett has exhibited the attributes of a true public servant and advocate for comprehensive and insightful management of these resources. It is therefore, with immense gratitude and appreciation, that the Environmental Federation of Oklahoma does hereby, on this the 23rd day of February, 2016, commend and honor James R. Barnett as an exemplary Public Servant.

Professor Kershen has served the state of Oklahoma and its people and businesses for over 44 years. He is notably a recognized expert in water law, environmental law, and agricultural law, holding the Earl Sneed Centennial Professorship at OU and having served as the Altheimer Distinguished Professor of Agricultural Law at the University of Arkansas.

He received the Distinguished Service Award from the American Agricultural Law Association, and his numerous awards, publications, and positions of public service reflect a lifetime dedication to the constitutional rule of law, students at all levels, and the interests of the public. He has for many years served, and continues to serve, as a consultant to law firms in Oklahoma which have represented the interests of Oklahoma farm families and Oklahoma commerce and industries.

Professor Kershen holds his undergraduate degree from Notre Dame University and law and graduate-law degrees from the University of Texas and Harvard University.

2014 : Jerry L. Barnett – past General Counsel for the Oklahoma Water Resources Board 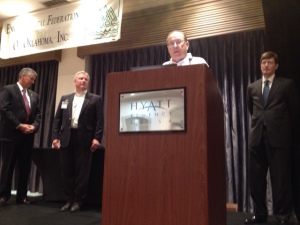 2013: Steven A. Thompson – past Executive Director of the Oklahoma Department of Environmental Quality