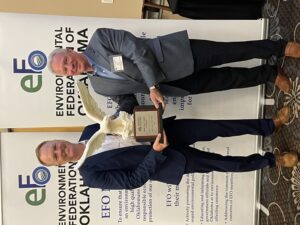 PSO initiated (2019– present) an energy efficiency program for the oil and gas industry to support a vital and hard-to-reach business sector important to the Oklahoma economy. The program provided rebates and engineering consulting services to improve operations by installing electric energy conservation measures and other non-energy environmental benefits. The program aims to target owners and operators of active oil and gas production wells in PSO’s service territory. To date PSO has provided these customers with $600,601 in rebates.

PSO’s energy efficiency program must be approved by the Oklahoma Corporation Commission every 3 years.  The OCC has approved the oil and gas program for the current portfolio (2022-2024) based on the success achieved in the previous portfolio; therefore, the program is financially self-sustaining. As the industry continues to face challenges post-pandemic, PSO has an offering to help control costs.  PSO will continue to reach new customers and build on the relationship we have established with service provides to continue transforming the market. 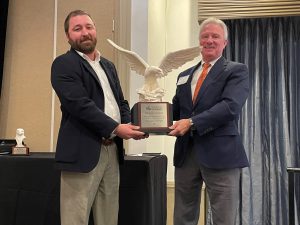 OG&E has partnered with Oklahoma City Zoo and Botanical Garden to provide browse material from vegetation management activities as supplemental feed and enhance social activities of zoo animals. The browse program began with elephants and quickly expanded to bears, apes and hoof-stock. The partnership has expanded to providing “furniture” in the form of tree trunks and large branches for large avian species, as well as wire spools for goats. This partnership was initiated in April 2020 as a means to reduce the amount of vegetation waste going into the landfills while providing food for zoo animals. 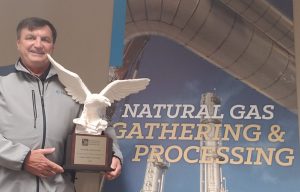 A direct result of the Lindsay Booster Station becoming more efficient led to modifications at ONEOK’s Maysville Gas Plant. Originally, natural gas-driven engines pushed gas upstream from Lindsay to Maysville where Maysville would then compress before processing. The new electric equipment at Lindsay allows for enough high-pressure compression to bypass the compressors at Maysville before processing. This change allowed for the opportunity to reduce emissions at both facilities.

Due to the complete switch to electric, Lindsay went from a Title V source to a minor source of emissions. These major change at Lindsay and the compressor bypass at Maysville greatly reduced ONEOK’s overall greenhouse gas emissions (GHG), as well. In fact, this project alone reduces ONEOK’s CO2e emissions by approximately 42,000 metric tons of CO2e annually. This is equivalent to removing the CO2e emissions associated from 9,000 cars each year.  View Presentation 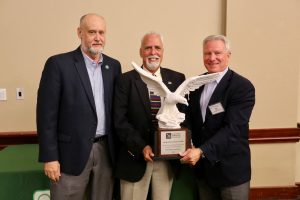 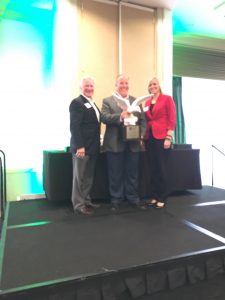 AES Shady Point (AESSP) located in LeFlore County conducted a test burn in 2017 of Tire Derived Fuels (TDF). With the involvement of DEQ and state tire processors AESSP purchased and utilized car tires from Oklahoma to replace some coal while reducing emissions, coal ash and reducing the amount of processed car tires going to state landfills or illegally dumped in streams.

ONEOK partnered with the Friends of Lake Overholser/Stinchcomb Wildlife Refuge community organization for the 12th annual clean-up of Lake Overholser and Stinchcomb Wildlife Refuge where 15 employees and family members of ONEOK paddled through water and combed through wooden areas to collect refuse and recyclable materials. Employees filled up dozens of trash bags with refuse, leaving public-use areas free of litter and hazards.

In addition, the Mustang Pipeline project team volunteered to construct fish habitat structures as part of a community outreach effort with the Oklahoma City Game and Fish Commission and through a partnership with the H.B. Parsons Fish Hatchery.  A group of 15 employees from ONEOK and Enercon, the project’s environmental contractor, spent an afternoon building the habitats in late 2016. The habitats were delivered to the hatchery earlier this year (2017) and will be placed at multiple locations within local city lakes, such as Edwards Park Fishing Lake, Kitchen Lake and the Oklahoma River. These types of habitats are designed to stay in place longer than a natural brush pile and are made primarily of flexible pipe and weighted with concrete blocks or cement. The weights anchor the habitats to the bottom of the lake, and the “spider” arms formed by the pipe provide the cover for the fish.

Chaparral was recently awarded the Frank Condor Award for Environmental Excellence by the Environmental Federation of Oklahoma for demonstrating initiative and leadership in its pioneering efforts to capture man-made carbon dioxide (CO2) at Coffeyville and permanently sequester it in the company’s North Burbank enhanced oil recovery (EOR) project.

Since mid-2013, Chaparral has captured 25 to 45 million cubic feet of CO2 per day from the CVR Fertilizer Plant in Coffeyville, Kansas. That equates to more than 1.9 million tons of CO2 that would have been vented into the atmosphere. Instead it is being captured and permanently sequestered into the Burbank field near Shidler, Oklahoma. This is more CO2 than is released into the atmosphere by 440,000 cars each year.

In 2013, the Vice President of Environment, Health, and Safety (EHS) for Access Midstream (Access) established a program to conduct voluntary restoration and conservation projects within the company’s operating areas to offset the effects of midstream oil and gas infrastructure development. Access was acquired by Williams in 2014; however, the program continues in the legacy Access Operating Area (Access OA). Since 2013, voluntary projects in OK, PA, OH, and WY have preserved and/or restored sensitive species habitat, improved water quality, reintroduced sensitive species, preserved native rangeland, and supported environmental education. None of the projects were required by regulations or permits.

This project was innovated both from the aspect of conducting a Superfund remediation at a landfill while the landfill was operational and using a new technology not only to develop renewable fuel but to clean up air and groundwater.  This technology can be transferred to other industries and applications.  The key point to this technology is the ability to take dirty methane gas and economically produce renewable goods.